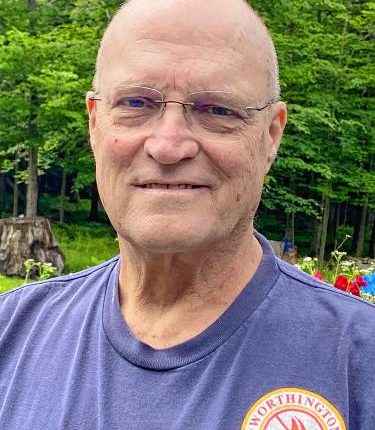 WORTHINGTON – The Select Board voted this week to appoint Rick Scott as the town’s new fire chief.

“I think we’re relieved to finally have somebody in the position who has a lot of experience,” said Select Board Member Charley Rose.

Select Board Chairwoman Amy Wang noted the support Scott has on the department.

“The fire department themselves are thrilled,” she said. “They’re very happy with Rick’s appointment.”

Rose said Scott’s bid for the job received support from the Chesterfield fire chief, as well as the current and former chief of the Cummington fire department.

“He had strong support from our neighbors,” Rose said.

Wang said the board had limited choices for the position and that “we feel that we made the best one.”

She also said that she’s waiting to hear some of Scott’s ideas for moving the department forward.

Scott, 71, is a former member of the Worthington Fire Department who has also served with the Cummington Fire Department. He stopped being an active firefighter in 2017 following a medical procedure. He said he applied for the chief’s position because he saw that the department “needed a little direction in order to move forward.”

Scott said that he wants to increase the department’s reliability and membership base, and he said that its reputation has suffered with its mutual aid partners.

“They need a response they can depend on,” he said.

Scott said that he wants to get younger men and women involved in the department, and that he’s talked to younger members already about reaching out to their friends.

Rose said that Scott is set to take the job on July 1, the start of the new fiscal year. He also said that Scott will not be taking a salary for the position, and because of this the town will not be petitioning the state to waive the age 65 retirement requirement for public safety officers.

Scott grew up in Longmeadow and after retiring from the U.S. Geological Survey in Denver following a three-decade career he returned to western Massachusetts and in 2006 helped to build the timber-frame house in Worthington that he now lives in. It was at this time that he also became interested in firefighting and joined the department, although Scott previously became a Red Cross CPR instructor in 1978.

“I feel very passionate about the fire department and about volunteerism,” Scott said.

Bernie Forgea is the former fire chief in Cummington, and he described Scott as “eminently qualified.”

“He could see the big picture when the rest of us couldn’t even see the small picture,” he said. “He was a tremendous help to me.”

“He’s got the skills, knowledge and abilities to help them,” he said.

The former fire chief, Kyle Challet, tendered his resignation to the Select Board in March. Challet, however, has been serving as interim chief as the search has been ongoing.

A proposal to make the fire chief’s job a full-time position was defeated overwhelmingly at this year’s annual Town Meeting.

Scott said that he thinks the chief’s position is more inspirational as a volunteer, and that volunteer members wouldn’t respond well to having a full-time paid chief.

“It’s a matter of walking the walk,” he said.

Scott’s appointment is for a year, and he expressed hope for serving for three.

“I’m hoping that in three years that we’re able to find the next chief,” he said. “For right now we have to get our feet firmly planted on the ground.”

Cheers to Summer With These Refreshing Cocktail And Mocktail Recipes