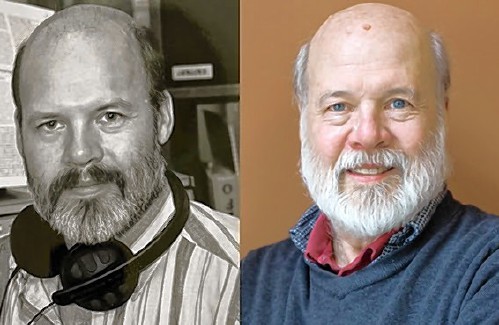 AMHERST — Pretty early in his life, Walter Carroll developed a great interest in classical music. But it wasn’t clear that would be his calling in life. He also loved theater, and after he’d graduated from college, he spent two years in the Netherlands with an acting company and learned Dutch.

But classical music eventually came calling again, first in Vermont and New Hampshire, and then in Amherst: In early June 1989, Carroll joined what was then known simply as WFCR-FM, at the University of Massachusetts Amherst, as the weekday afternoon host of the station’s classical music program.

For 33 years, his voice has been a familiar one for thousands of Valley listeners who tune in to that afternoon show. But now Carroll, who’s 77, is calling it a day: The Amherst resident’s last day on the air at what is now New England Public Media (NEPM) 88.5 will be July 1.

Over about the last eight years, ever since WFCR, the local NPR affiliate, moved from the UMass campus to Springfield, Carroll has worked part-time. He says he also may be filling in occasionally at the station in coming months as NEPM looks for a successor for him.

But otherwise, he said during a recent phone call, he’s looking to do some traveling with his wife, Ann, and to catch up on attending classical music concerts and operas.

A concert of Bach he attended at the Academy of Music in late May, he noted, “was the first show I’d been to since the pandemic arrived” in March 2020. “Now I’m looking forward to hearing more music — it’s definitely time.”

That said, Carroll, an Indiana native who did classical music programming on his campus station when he attended Franklin College in the Hoosier state, says he’s enjoyed his run at NEPM, where he’s played a range of classical music but also shared his affinity for some of the big names from the canon — Bach, Beethoven, Schubert, Brahms, and others — with audiences.

Researching the stories behind the composers and their work on a particular piece of music, then making that part of his programming, has also been a key part of his job: “Putting the music in context and talking about what went into the composition process has always been really important to me.”

John Voci, NEPM’s senior director of radio, spoke to Carroll’s work and legacy at the station, calling him in a statement “a beloved companion to listeners. He’s filled our homes, offices and hearts with the classical music that he loves.

“Walter will be missed by his colleagues at NEPM and by his listeners throughout western New England,” Voci added. “I speak for many in wishing him and his wife, Ann, all the best and many years of enjoying traveling, attending the opera and visiting with family and friends.”

Carroll, born in 1945, grew up in a musical family in Indianapolis — one grandmother was an opera singer, a grandfather was a conductor, and some uncles were jazz musicians — and he sang in a variety of choirs in high school and college. Classical music “was always a major part of my life,” he said, though he had some early interest in pop and folk music, too.

Theater was also an interest, though after acting in Europe for a few years after college, he ended up moving to Japan, where he lived for nine years, teaching English and working for TV and radio stations in Tokyo; that work included dubbing films into English, narrating documentaries and providing voices for other recordings.

He moved back to the U.S. in the mid 1980s and landed a job as a classical programmer first at a station in Vermont, then for New Hampshire Public Radio. A few years later, when he heard about a job opening at WFCR, he applied.

“I’d been through the area and I’d listened to their programming, and I thought it would be a good place to work,” he said.

Though some classical music aficionados have expressed concern about the future of the genre, pointing to the aging of a fair part of its audience, Carroll believes classical music is still strong, both in general and here in the Valley, with new and younger musicians entering the field.

That said, he noted that “maybe it’s time” for a younger person to take his place at NEPM, someone more conversant with reaching younger audience members through streaming music services and social media sites.

And acting? Carroll never closed the door on that. He was active for years with the Hampshire Shakespeare Company, and he’s also performed in one- and two-person dramas in which he’s played historical characters.

One was with his wife, in which the couple performed at the Emily Dickinson Museum in Amherst and other locations as David Todd and Mabel Loomis Todd, respectively, the Amherst couple who were contemporaries of Emily Dickinson. (Mabel Loomis Todd was the first person to bring Dickinson’s poetry to the larger world — and she also had a notorious affair with the poet’s brother, Austin).

Carroll will lead an NEPM trip, the “Festive Winter Waltz,” this December to Germany, France, Switzerland and Austria. Meantime, he may look around for possibilities of doing more acting: “I haven’t really explored it, but we’ll see what develops.”