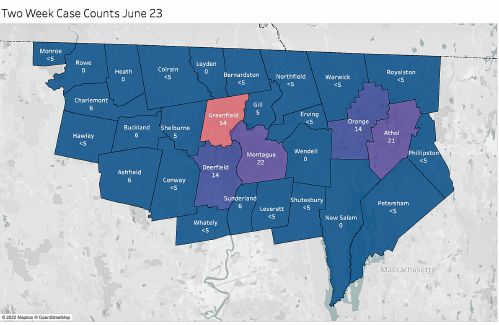 Franklin County’s 166 confirmed COVID-19 cases over the past two weeks continues a downward trend that sees the region’s lowest rate of positivity since the end of March, according to data from the Public Health Institute of Western Massachusetts.

“Numbers are coming down significantly right now, as best as we could tell,” Montague Board of Health Chair Melanie Ames Zamojski said at the town’s Selectboard meeting Monday.

County data was presented at a Franklin Regional Council of Governments (FRCOG) Local Public Health Roundtable on Monday afternoon. Director of Community Services Phoebe Walker, who narrated a slideshow during the Zoom meeting, recognized that the past two weeks’ case numbers are “slightly down” from the previous window’s 209 positive cases. The last time fewer than 166 cases were recorded across the county over a two-week period was on March 31, at which time 143 cases were documented, according to Public Health Institute data.

Ames Zamojski noted, however, that recorded data is “not an accurate reflection” of how many positive cases exist.

“The numbers are accurate for what we get numbers for,” she explained. “The problem is that we’re not getting people reporting that they have COVID because the vast majority of people are doing home testing.”

“As public health officials, we’re not receiving the public tests that we did before the home testing happened,” O’Reilly said.

In spite of this, local officials have recognized recent wastewater testing as providing helpful data. On its website, Biobot Analytics, which is monitoring wastewater data, states its chart illustrates the level of virus detected in wastewater samples weekly. Data from June 22 showed 715 COVID-19 copies per milliliter of sewage in F, the lowest count since data started being recorded on May 11.

“Having a downward trend in the summer is really consistent in northern North America,” O’Reilly said.

She added that there is “a certain expectation” for case counts to stay low throughout summer for this reason. She advised people should, however, remain responsible as they look to curb the spread and test appropriately.