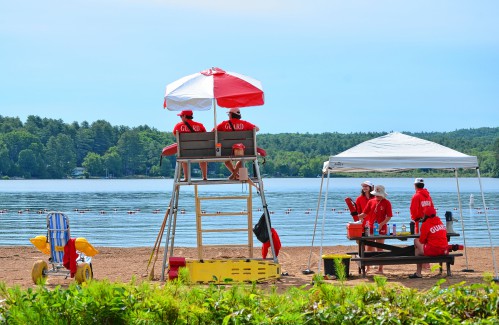 As Americans geared up to celebrate the nation’s independence, many celebrated their individual independence with a trip to the beach.

Franklin County’s freshwater swimming spots bustled with life over the holiday weekend as tucked-away shores drew people from all over. Popular public areas, such as Greenfield’s Green River Swimming and Recreation Area and Shutesbury’s Lake Wyola, are often a visitor’s introduction to an otherwise low-key community on a broader scale.

“I think it’s nice the town has something that brings outside people,” said Shutesbury Police Officer Zack Warner, who was at Lake Wyola to help control traffic on Sunday.

“I think it attracts people to this community and allows many people to experience it,” commented Department of Conservation and Recreation laborer Hannah Haughey, who monitored the entrance to Lake Wyola.

This Independence Day weekend, Haughey said, the beach has been considerably more active, continuing a trend from previous years. For the lake-raised resident, it has come as no surprise to see the area become a favorite to those from far and wide.

“We’ve got great picnic areas,” Haughey said. “I grew up on this lake and I think it’s a very peaceful and pretty lake.”

“The families come from all over and bring their grills and coolers … and have a great time,” Newcomb added.

Not everyone sees an influx of outside visitors as a positive thing, however. Those who live along smaller and more discreet town beaches in particular — such as the beach along Ashfield Lake — have cited issues with outsiders overcrowding what had once been a hidden gem for townspeople to enjoy.

“In my time here, which is only a year, it’s become more of a public beach than a beach just for people in Ashfield,” Ashfield resident Eric Lehan said. “In a balance and moderation, it’s fine, but when there’s swarms in there, it’s unmanageable.”

“We do have a lot of non-townspeople come and use the beaches and it’s been a problem for years,” said Mark Lavallee, an Ashfield resident who lives beside the beach on the lakeshore.

Lavallee’s visiting friend, Virginia resident Steve Brown, smiled as he confessed to being an out-of-towner. Brown framed Ashfield Lake as an escape from the Washington D.C. suburb he’s from.

“Where I live, it’s acres upon acres of housing and condos,” Brown said. “There’s not really that country feel.”