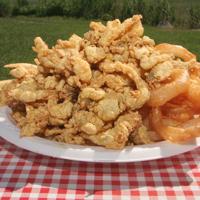 Local clams are in short supply because of red tide, a type of harmful algal bloom.

“We are in a full closure of all of the North Shore of Massachusetts,” said Gloucester Shellfish Warden Peter Seminara, who put out the word on Facebook that “consuming shellfish dug in Gloucester can be harmful or fatal.”

Red tides are colonies of microscopic algae that grow out of control, produce toxins that kill fish, make shellfish dangerous to eat, or make the air difficult to breathe, while often turning the water red, according to the website of NOAA’s National Ocean Service.

Toxin levels in the waters of Cape Ann and the North Shore are dangerous to people, Seminara said Wednesday, and any and all shellfish harvesting is prohibited in Gloucester. He said counts were still going up and the closures could remain in place for a minimum of three to four weeks.

The toxins produced by red tides are dangerous because they can accumulate in shellfish and eating such shellfish can cause paralytic shellfish poisoning in people. However, the toxin does not harm the shellfish, and when the bloom goes away, the shellfish rids itself of the harmful toxin.

When biotoxin levels exceed 80 micrograms per 100 grams of shellfish meat, affected areas are closed to shellfishing and sampling continues, according to the state Division of Marine Fisheries’ website. Once three consecutive samples are below 80 micrograms, the area reopens, the state says.

Seminara is warning that harvesting clams is prohibited, and in Gloucester one could face a fine of $500 as city shellfish areas have been closed “due to an outbreak of paralytic shellfish poison.”

Gloucester, Newburyport, Essex, Ipswich, Newbury, Rockport, Rowley and Salisbury were notified that as of June 16 “the Massachusetts Division of Marine Fisheries has closed all bivalve shellfish and carnivorous snails in shellfish growing areas N1 through N14.”

North Shore cities and towns, including Beverly, Danvers, Manchester-by-the-Sea, Marblehead, Peabody, Revere, Salem and Swampscott, were notified June 23 of areas closed indefinitely to the harvesting of blue mussels due to red tide.

Woodman’s of Essex, which is known as serving the first battered and fried clams over 100 years ago, according to its website, has learned to weather the red tide as many have learned to weather blizzards, said Maureen Woodman, the restaurant’s director of catering sales. Red tide has no economic impact on the eatery’s Main Street.

She said over the past 20 to 30 years, “Woodman’s has constantly been preparing the clam supply whether it be a rain closure or red tide” to ensure its supply for the summer season. Other clam suppliers on the Eastern Seaboard “help us tremendously.”

“We really have figured it out,” she said. “It’s just become an additional challenge to our industry. We are lucky to have an amazing reputation, and we have become friends with dealers from the tip of Maine down to Maryland.”

Woodman said the restaurant always wants local Ipswich clams, and its leaders’ worry about how the closures can hurt local diggers, but “we have really figured it out how to handle it without a blip.”

One thing she said Woodman’s clam buyers have noticed is that clams from other suppliers come in a more uniform size, while local clams are more irregular, and the restaurant can get them in small, medium and large sizes from diggers.

“I still can’t wait for the Ipswich clam to come back,” she said.