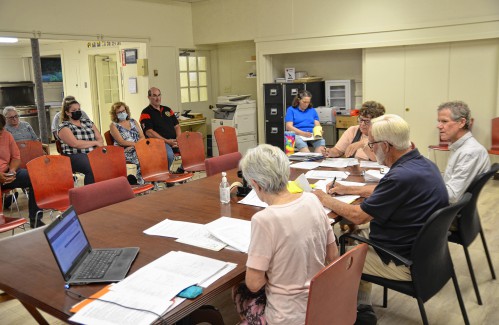 Improper storage of the results, Selectboard member Glenn Caffery said, was one of the multiple concerns residents relayed to town officials regarding Galvis’ handling of the June 27 election. When asked by Caffery why Galvis had not physically left election results at the municipal offices the night of Leyden’s election, Galvis reasoned that she had just gotten back to town at 11:30 p.m. and decided to store the results in a locked safe at her home.

“I did not feel comfortable leaving them (in the municipal offices) for someone to see them until I got back,” she told the Selectboard on Monday.

Galvis said she was unaware that storing election results as such was a violation of Massachusetts General Law Chapter 54, Section 105, which states election officials must place all ballots into a sealed container and “place all election material, so far as practical, in a locked facility.”

Galvis noted that while the election results were improperly stored, documentation was still properly sealed.

Another concern that was addressed regarded notifying fellow town officials and residents of what the results were promptly after the votes had been tallied.

“I’m just wondering why there were inconsistencies with how people were notified,” Caffery said.

In regard to notifying town officials, Galvis said she didn’t have everybody’s phone number to reach out individually. She explained that she had contacted newly elected Selectboard member Katherine DiMatteo in the hope she would reach out to her Selectboard peers.

“I thought Kathy was going to notify you that night,” Galvis said.

The election included a four-candidate race for two Selectboard seats, in which Caffery and DiMatteo were selected by voters, and a race for moderator in which Jack Golden won a one-year term. According to Galvis, voter turnout was 61.7%, as 364 of the 590 registered voters in Leyden cast their ballots.

In regard to Galvis’ notification of residents, Municipal Assistant Michele Giarusso said she had not received an official certified result sheet from Galvis until just last week, despite the election taking place on June 27. Leyden’s town website reflects that the results were posted online on July 11. Galvis admitted that despite unofficially sending Giarusso the results via email on June 29 — the same day the Greenfield Recorder received the results — submitting these official results was a task that fell by the wayside.

“It’s a part-time position,” she said of her role, which entails office hours on Monday evenings, Friday mornings and by appointment. “It’s very hard to get everything done.”

“I think it’s another question for us to get Donna’s opinion on,” DiMatteo said of getting a better system in place. “I don’t think we have an answer except that we need an answer.”

Galvis, who was elected as town clerk in June 2021, said she is “still learning” aspects of how to go about her clerical duties during election season. She agreed to confer with other town officials to smooth out election-related operations.

“It’s kind of like a fire hose,” Caffery said. “There’s so many opportunities to learn.”

Biden to announce climate actions at ex-coal plant in Mass.