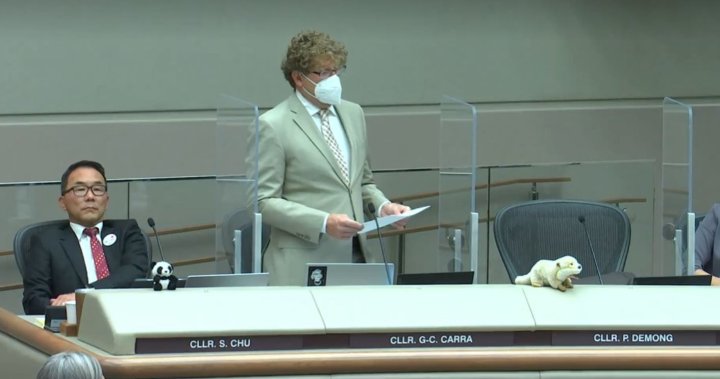 Ward 9 Coun. Gian-Carlo Carra has issued apologies to both Calgarians and his council colleagues after two investigations from the city’s integrity commissioner resulted in sanctions against him.

Calgary’s integrity commissioner, Ellen-Anne O’Donnell, found Carra violated the council code of conduct when he failed to include his interest in a property in Inglewood on his public disclosure form, which all city councillors are required to do.

According to the integrity commissioner’s report, Carra and his wife made a $300,000 down payment on the home back in 2015, but “there was no written agreement or document of any kind” setting out the terms of the transaction.

“I apologize for failing to properly register my interest in a real estate matter,” Carra said to council on Tuesday, reading from his written apology.

“After a protracted, conflictual and very public seven-year pre-development process wherein, through consultation with private counsel and two successive ethics commissioners, I endeavoured to achieve the highest possible ethical conduct with regards to my family’s evolving interest in 66 New Street SE.”

‘I screwed up’: Gian-Carlo Carra speaks out on integrity commissioner’s investigation

In his apology, Carra called the integrity commissioner’s ruling “instructive, clear and fair,” and that he should have disclosed his interest in the property on his public disclosure form when he first got involved with the property back in 2015.

“I absolutely should have disclosed my interest when we registered that interest against the title in 2021,” Carra said.

Carra maintained his failure to disclose the property was “a paperwork mistake” that he takes seriously.

“I accept the commissioner’s ruling and council’s sanction and I apologize to council and to all Calgarians,” Carra said in council chambers.

Those sanctions included a public apology to Calgarians, and Carra must attend training with the ethics advisor.

Later in the meeting, city council will debate a motion to send the integrity commissioner’s findings to the provincial government and the Calgary Police Service for further review.

The Ward 9 Coun. also apologized for a second incident investigated by the integrity commissioner that centered around a social media post.

It came after revelations about Chu in a CBC News story, published days before the October election, alleging misconduct with a minor while he was a Calgary Police Service officer in 1997.

The complaint to the integrity commissioner said Carra’s tweet insinuated the councillors “support child molesters and are not fit to serve.”

Carra was removed from any chair position on all boards, committees and commissions he participated in as part of the council-imposed sanctions.

“While I value disagreement and debate on matters of public interest between members of council and I view social media as an important venue for such discussions, I stepped over the line in how I engaged in some of those discussions,” Carra said in his apology.

“I accept the Integrity Commissioner’s ruling, Council’s sanctions, and I apologize to Councillors McLean, Chabot, Sharp, and Wyness.”