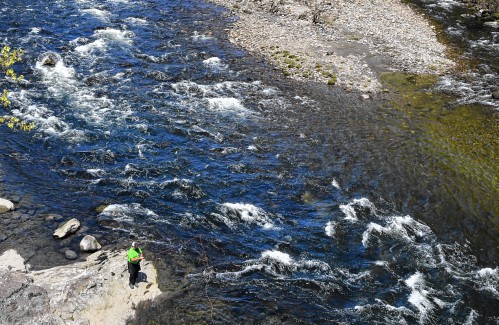 DEERFIELD — Standing on the Stillwater Bridge, U.S. Rep. Jim McGovern and town officials announced the filing of a bill to study the river, advancing a grassroots campaign that began two years ago to designate the Deerfield River as a National Wild and Scenic River.

“Today we have gathered to say it’s time to advance a great idea: to add the Deerfield River and its tributaries to the National Wild and Scenic River System,” McGovern said. “Wild and Scenic Designation for the Deerfield would deliver financial and technical assistance to the communities in the watershed, who are already dedicated to preserving and protecting this precious resource.”

Franklin County towns along the river have endorsed the bill, along with the Franklin Regional Council of Governments (FRCOG), the Deerfield River Watershed Association, the Connecticut River Conservancy, and Trout Unlimited’s Deerfield and Connecticut river chapters.

The study, which will take at least two to three years to complete, will identify and recommend portions of the Deerfield River that meet the federal government’s criteria. After that, another bill will need to be brought before Congress to officially designate portions of the river.

Once designated, river stewardship plans are developed and distributed to communities containing those portions of the river, while also opening a trove of federal funding and other technical services to help communities pay for and implement these conservation plans. The study will consider the entire 76-mile length of the Deerfield River and will also consider its major tributaries, such as the Green and South rivers.

While allowing federal benefits to make their way to Deerfield River communities, the designation would not put land under federal control, change any existing land uses or affect private property rights.

Chris Curtis, vice president of the Deerfield River Watershed Association, said this is an opportunity to protect the Deerfield River for generations to come. He said there are a variety of projects and initiatives that can be pursued once the designation is approved and said the Westfield River — which was designated as a Wild and Scenic River in 1993 — could be a template, as the river’s walking trails have been improved with funding from the federal government and water-quality control monitoring protocols have also been established.

“It’s exciting. This is something that we can do to help communities with their protection of the river and better management of the river,” Curtis said after the event. Possible projects, he added, could include “public education and outreach, river access projects, things like that. Helping to manage the recreational traffic on the river, I think, is going to be a really big issue here.”

Recreation is a vital economic component to the communities around the Deerfield River, and Curtis said designating the river for federal protection will ensure recreation will continue, while also conserving the natural elements of it.

“We have so much pressure on the river, like a lot of natural areas since COVID. Everybody seems to be recreating a lot more, which is great,” Curtis said. “But, we came here yesterday and had to clean up all the trash in the area from yesterday’s tubing. It’s a heavily accessed river these days — a lot of people are enjoying it, which underscores the need for protection.”

McGovern said the bill will help protect the “treasure” that is the Deerfield River, while ensuring it is available for everyone to use.

“We now have an opportunity to secure for the river the national recognition it deserves,” McGovern said. “This work is part of a bigger picture: conservation matters. Preserving nature for future generations matters.”

From here, Curtis said organizations like the Deerfield River Watershed Association will continue to work with communities and raise awareness about the river and its conservation needs while they wait for the study to be completed. In the meantime, Curtis thanked McGovern for bringing the bill to Washington D.C. and advancing the conservation of the Deerfield River.

“We want to make sure this is a totally locally-driven process,” Curtis said. “The congressman’s support is so special to us. Without him, we wouldn’t be able to move forward. He’s done a great job for us.”

As Massachusetts reports the 8th most monkeypox cases, Ayanna Pressley and others call for ‘aggressive action’