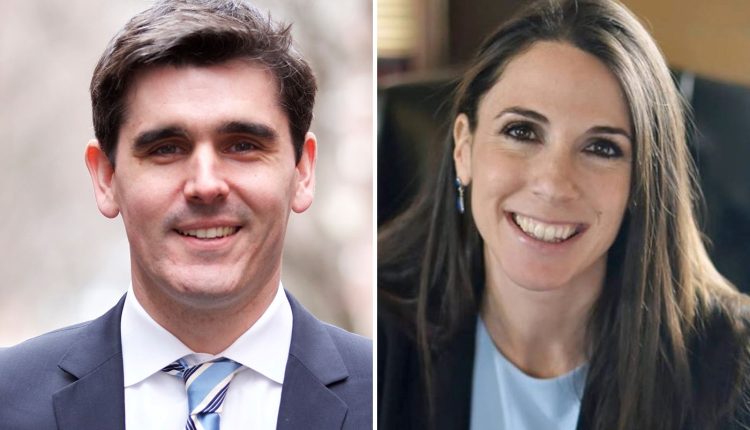 Former Assistant Secretary of Transportation Chris Dempsey and State Sen. Diana DiZoglio attacked each other on issues such as transgender rights and non-disclosure agreements in government sexual harassment cases during a contentious debate between the candidates for Massachusetts state auditor.

During the debate Monday night, which was hosted by WGBH, moderator Jim Braude covered topics ranging from how to fix the MBTA to how to end the racial wealth gap in the state.

Here are five takeaways from the debate.

The candidates agree on many key issues

Braude began the debate by asking the candidates whether they support Gov. Charlie Baker’s suggestion that over $2.5 million could be returned to taxpayers from the state due to a 1986 law that limits state revenue growth.

Both candidates said they support the idea of returning that money to taxpayers. They also agreed that the Massachusetts Legislature could have already dealt with the extra money if they hadn’t failed to take up Baker’s economic development bill until the last minute.

Both candidates also support a ballot initiative called the “millionaire’s tax,” which, if passed in November, would tax earnings above $1 million at 9%.

Both candidates oppose the 30-day shutdown of the Orange Line. They said that while they agree with the measure in principle, they do not trust the Baker Administration to accomplish what it has promised to accomplish in that time.

Both candidates have plans to combat Massachusetts’s racial wealth gap. While DiZoglio said she would audit state contracts to find ways to hire more minority businesses for state projects, Dempsey said he has a plan to use federal stimulus money to adopt recommendations from racial justice groups.

DiZoglio was ready to attack Dempsey on several fronts

DiZoglio did not hesitate to attack Dempsey for his support for a 25-cent gas tax increase during his time as the state’s transportation secretary.

“My opponent’s been pushing for a 25-cent gas tax increase for years on working families and our communities, which disproportionately impacts those that are coming from lower income communities,” she said.

Dempsey defended by saying it was in the interest of garnering money to fix the state’s imperiled public transit system.

“My role as transportation secretary for Massachusetts was not to say exactly what the Legislature should do, but to call out the needs and the resources that we need to actually fix transportation,” he said. “That’s exactly the job of the auditor — not to set policy, but to be clear with the facts and the data.”

DiZoglio next came after Dempsey for saying in an email that he had posted all candidate questionnaires from political organizations to his website and called on his opponents to be transparent and do the same, when he had, in fact, not yet posted one from Reproductive Equity Now.

Dempsey responded by saying his campaign had always been open about the fact that the Reproductive Equity Now questionnaire was not finished and would go up soon.

“We have been in conversations with them for weeks. They have expressed some concerns about the information being released in the questions, not the answers, and we want to respect that at a time when reproductive rights are under attack at the Supreme Court,” he said.

Over the weekend, The Boston Globe Editorial Board praised Dempsey for posting both the answers to the questionnaires and the questions, as that allows voters to see what kind of promises candidates have made to organizations which have endorsed them.

The same article noted that DiZoglio had not posted the questionnaires from the the Massachusetts Teachers Association or the American Federation of State, County, and Municipal Employees, both of which have endorsed her, but by Monday evening, those questionnaires had been posted.

DiZoglio also attacked Dempsey for being a part of Massachusetts Department of Transportation (MassDOT) during the years leading up to now when the MBTA is experiencing entire line shutdowns, fatal incidents, and dangerous fires.

“My opponent, for as much as he loves to talk about being the assistant secretary of transportation, was part of the failed culture of transportation that led to what we’re seeing,” she said.

Dempsey defended himself by saying he is proud of the work he accomplished as a part of MassDOT, including launching apps which tell you when trains and buses should arrive.

He also addressed DiZoglio’s claim that she is the only candidate to have called for a safety audit of the MBTA.

“We need more than press releases to fix this issue. That’s what the senator is offering here — a press release that says ‘I call for a safety audit,’” he said.

“I encourage people to go to my website…and read our four-point in-depth plan which will talk about how the Auditor’s Office can help be a part of fixing the MBTA.”

Where the candidates disagree, they disagree strongly

During the debate, Braude also brought up the issue of government-funded nondisclosure agreements (NDA) with victims alleging harassment and discrimination in the workplace.

While DiZoglio has pushed to make these types of settlements illegal, Dempsey says he believes it is best for victims to leave this option open, and has, in the past, voted against a ban on this type of NDA.

Dempsey referenced Ellen Zucker, who is well-known for litigating such cases, as someone who agrees with him and has said so recently in an article published by the Boston Bar Association.

But DiZolgio herself wrote the opposing op-ed that was published in tandem, later citing her experience as a legislative aide who alleged sexual harassment and was forced to sign an NDA to get her severance package.

“I don’t believe that we should be using tax dollars to cover up any sort of abuse, harassment, discrimination of any kind,” she said.

DiZoglio and Dempsey also disagree as to whether the Auditor’s Office can audit the Legislature. The previous two auditors do not believe the office has that authority, but DiZoglio does, and claims this has been done before.

Dempsey said he does not think the Auditor’s Office can audit the Legislature, but said he would like it to do so if it was found that it can.

“I don’t see authority for the auditor to audit the Legislature, but certainly I’m going to use this office to its full potential,” he said. “If that is something that the general counsel that I hire says we have the power to do, absolutely, we will do it.”

Dempsey had some bold attacks prepared against DiZoglio as well

While discussing how to address the state’s racial wealth gap, DiZoglio brought up the lauded “Massport model” for diversity and inclusion. Dempsey responded by suggesting that DiZoglio doesn’t understand the model, but did not give a reason why.

“I’d be interested in hearing the senator talking about how that model actually works. I do think it’s a good model. I’m not sure the senator completely understands how it works,” he said.

DiZoglio responded by saying Dempsey was trying to discredit the work of women on Beacon Hill and reiterated her qualifications in regards to this issue.

“As the Senate chair of the Small Business Committee, I work directly with the Black Economic Council of Massachusetts on provisions to increase accountability around our state’s Supplier Diversity Office,” she said.

“And actually my office played an instrumental role in making sure that the Supplier Diversity Office is held accountable regarding this administration’s mandate to diversify state contracting goals.”

Dempsey then simply doubled down on his claim.

“I didn’t hear an explanation of how the Massport model works,” he said.

Later on, Dempsey highlighted that he’s been endorsed by the current state auditor, Suzanne Bump, and Senate President Karen Spilka.

DiZoglio countered by saying he got their support because she has been calling for more oversight of them and their offices.

Dempsey also challenged DiZoglio’s commitment to changing public records law by pointing out that she’s never sponsored a bill to change it and did not cosponsor a bill that was previously introduced.

DiZoglio said she didn’t cosponsor the bill because she wasn’t asked to. She also said she did file a bill asking for 21 amendments to Senate rules that would ensure senators had time to read bills before voting on them.

Lastly, Dempsey accused DiZoglio of being a “socially conservative democrat.”

“If you look at her voting record, she has one of the most conservative voting records in the entire state legislature. She has voted in the past against transgender rights, against gun control, against police reform,” he said.

DiZoglio said that Dempsey’s statement is untrue, and that she not only made a historic vote to support trans rights in the Commonwealth, but that she has been endorsed by two trans women.

When given a chance by Braude to talk about what issues they’d focus on as state auditor, DiZoglio and Dempsey gave differing answers.

“What I want to do first is have the National Association of State Auditors take a look at the office and do an audit of the office so that when I come into the office, I’m able to understand if there are challenges in the office in any respects…Then we get to work implementing my social justice and equity audit plan…that seeks to address inequities in things like housing, mental health services, addiction services, and pay equity.”

“We haven’t talked today about my plan to do carbon accounting, to make the office a national leader on climate by holding agencies accountable for the laws that are on the books that require them to reduce emissions. We’ll also create an auditor’s commission on environmental justice so that people who are on the frontlines of the climate crisis have a seat at the table on Beacon Hill. …We’re also going to tackle tough issues like reform of the Massachusetts State Police. I have great respect for our troopers on the frontlines, but we need more oversight and reform of that agency.”