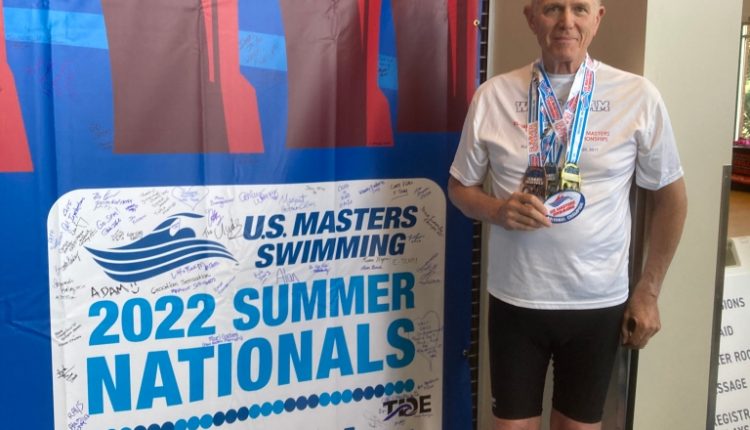 Jim Pope is proving age isn’t anything but a number.

The 79-year-old Lowell resident made quite the splash while competing at the United States Masters Swimming (USMS) Summer Long-Course championship in Richmond, Virginia, Aug. 3-7. Representing both the Lowell YMCA and the New England Masters, the ageless wonder was a top five finisher in six different events, including a pair of first place victories.

His own toughest critic, the veteran was somewhat disappointed with his overall effort.

“Not as well as I had hoped,” said Pope, who competed in a pool of 21 other men ages 80-84. “But as one guy I talked with said, ‘If you perform as well as you hope, you aren’t setting your goals high enough.’”

“The 400m was a tough, grueling event,” said Pope. “Getting through it was an accomplishment.”

“The 200 back (was disappointing),” said Pope. “I was leading but misjudged the finish and got touched out for second.”

The USMS holds spring and summer championships each year, rotating them among different parts of the country. The spring meets are held in 25-yard pools, while the summer sessions are held in 50-meter venues.

According to Pope, under international rules, all swimmers age up on Jan. 1, much like racehorses. So at 79, with his 80th birthday set for November, Pope was technically the youngest in his 80-84 age group.

The president of Lowell Rotary and chair of the Lowell Election Commission, Pope was honored to represent both the Lowell YMCA and the New England Masters once again in this annual endurance test.

“I’ve swum with the NEM several times including World Championships in Montreal and Budapest,” said Pope, noting that the YMCA team is technically a practice group within the NEM. “They’re a great group. I always enjoy swimming with them whether it’s as a member of NEM or against them as a member of the Y team. In New England meets, we swim as the Y, in national and international meets we swim as NEM.”

Born in New Jersey and raised in Illinois, Pope has lived in nine different states, as well as England and Germany, before settling in Lowell in 2015, marrying a woman from Massachusetts.

He first took the plunge while swimming competitively in high school in 1956, before taking almost a decade long hiatus following college graduation. He rediscovered masters swimming in 1975 and has been a regular in the circuit ever since.

Although he broke his hip over a year ago in a bicycle accident, Pope continues to push himself to his aquatic limits.

“I enjoy swimming and it keeps me fit,” said Pope. “The competition acts as an incentive to work hard in practice and to improve one’s strokes. Otherwise, you just get lazy. The NEM are my fifth master team. Swimming and socializing with like-minded people is an important part of the enjoyment.”

If anything, competing on the national stage has only convinced Pope that he still has plenty left in the swimming odometer, as one of the older veterans demonstrated.

“The most inspiring part of this meet was the 100-year-old swimmer from Oregon, Willard Lamb, who smashed the national and world records in every event in which he swam,” said Pope. “He beat a lot of guys younger than he is. He is truly amazing.”

Next up for Pope, diving headfirst into the short course meters event at WPI in December.

According to Lowell YMCA teammate David Fei, watching the local legend compete at such a high level is something he aspires to do.

“Jim’s approaching 80, and I would be ecstatic to move as well as he moves in the pool 10 years from now,” said Fei. “You’d never guess he’s 79, just seeing him swim. I think part if it is that lifestyle, staying active. It’s a testament that if you put the time and effort into it, you can achieve things you never thought you could.”