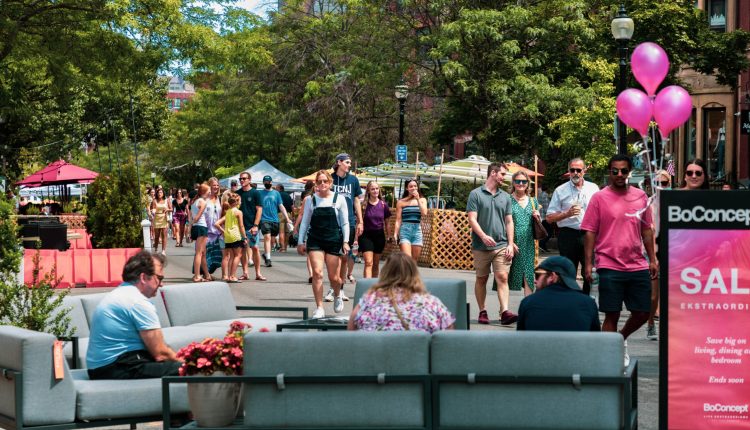 Newbury Street — a mile-long, eight block stretch that has been made pedestrian-only on some summer Sundays in the last few years — will be free of cars from Berkeley Street to Massachusetts Avenue. The intersections of Exeter Street, Fairfield Street, Gloucester Street, and Hereford Street will also be car-free from 10 a.m. to 8 p.m. on each of those Sundays.

Newbury Street, on these open days, will be reachable on public transportation via the Arlington and Copley stations on the Green Line, the Back Bay station on the commuter rail, and the Orange Line shuttle. Bike corrals are stationed throughout the event and there are Blue Bike stations on adjacent streets. People coming by car can park in garages in the Copley Square area south of Boylston Street.

Only businesses that have brick-and-mortar locations on Newbury Street can participate. Any of those businesses are welcome to set up an event outside as long as they are using the parking lane directly in front of their business and coordinating with neighboring storefronts.

Open Newbury Street started in 2016 on one Sunday in August. Its success inspired the expansion of Open Newbury Street to three Sundays a year in 2017, 2018, 2019, and 2021, with a hiatus in 2020 for COVID-19. This year’s expansion to six Sundays makes it the longest running version of the events yet.

The Centre Street and Blue Hill Avenue events were held in early July and August, but the Dorchester Avenue open street day is forthcoming, on Sept. 24 from 9 a.m. to 3 p.m. These events have been very popular so far, and many are in favor of expanding events like these even further.