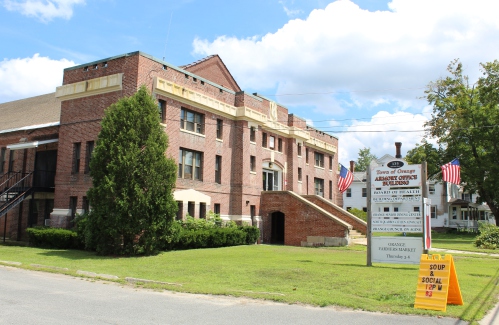 ORANGE — To drum up awareness about the Orange Armory, the town is submitting the building to a statewide historic preservation non-profit for consideration for an “endangered historic resource” designation.

As uncertainty surrounds the future of the dilapidated armory, the town hopes to shine a “statewide spotlight” on the building by submitting it to Preservation Massachusetts, which would add the armory to a list of other endangered historic resources, according to Planning Technician Walker Powell.

“It’s an honorary designation,” Powell said at Wednesday’s Selectboard meeting, noting there is no immediate financial benefit. “It brings a statewide spotlight to these resources and can help bring on action or opportunities.”

Preservation Massachusetts, a historic preservation nonprofit founded in 1985, “actively promotes the preservation of historic buildings and landscapes as a positive force for economic development and the retention of community character,” according to the organization’s website.

The Most Endangered Historic Resources Program highlights significant historic resources in a community as a way to act “as a catalyst for action and opportunities.” The theme for 2022’s endangered resource list, which will be announced in November, is “Planning for Community” and will focus on highlighting resources that are “not only historically significant, but also emphasize continued importance and possibility to their communities,” according to Preservation Massachusetts’ website.

Powell said the armory would be a “good fit for the theme” and could help create some sort of development opportunity for the town.

“The armory will continue to be unused, underutilized and unrepaired,” Powell said, noting the town needs to “raise more awareness that the building is there, looking for a use.”

The armory, at 135 East Main St., has long been plagued with issues. In October, the Selectboard voted unanimously to close the building and temporarily relocate the town offices based there to 62 Cheney St. Town Administrator Gabriele Voelker has told board members the armory’s basement always has water in it and the floor is covered in brown mold, “this very slippery, oozy stuff.” She also said drenched insulation is hanging from the ceiling in the upstairs roller skating rink, and the front staircase is crumbling.

There is no money involved on either end of the designation, as the town does not need to pay to apply for it and Preservation Massachusetts does not award money through this program.

Alec Wade, Orange’s community development director, said the town’s Historical Commission will make an official request for the application and that this is a chance for the town to stand by one of its historic buildings.

“For one, it’s a declaration that we value this resource and want to see it preserved,” Wade said. “It better positions (the armory) in grant-writing activities as well as getting the word out to Preservation Massachusetts’ larger network of preservationists.”

Wade said the town issued a Request for Information (RFI) to the private sector “for the lease, purchase or otherwise reuse” of the Orange Armory, but it “hasn’t yielded many results,” which he said may be due to “trepidation based on the age and current condition of the building.”

In the meantime, Wade will also be working with students from the University of Massachusetts Amherst’s Isenberg School of Management to do some research on the building as well as create public engagement opportunities for residents, nonprofits and businesses in the region.