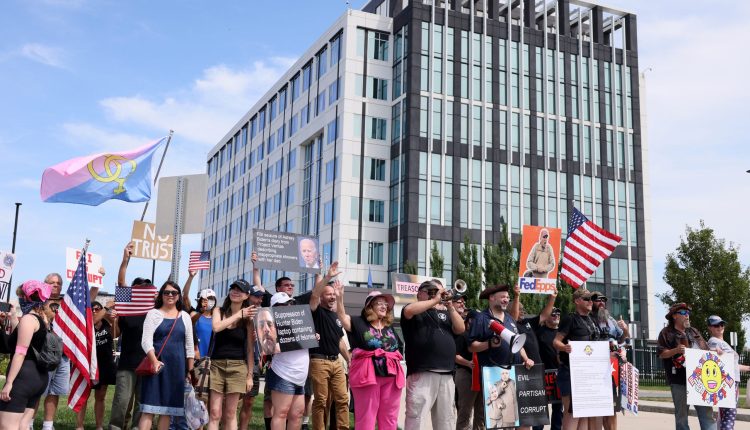 The Boston Globe reported that about 40 people attended the protest, during which a trumpeter played patriotic songs such as “The Star Spangled Banner” and “America the Beautiful,” and protesters held signs with messages such as “No Trust” and “FBI is corrupt.”

The protest was organized by Super Happy Fun America, whose leaders have ties to white supremacist organizations and who most infamously helped organize the 2019 Boston Straight Pride Parade, as well as Refounding Fathers Coalition.

“The bureau has gone rogue and is now a partisan police force, trampling all over our Constitutional rights,” the groups said in a press release about the protest. “…The FBI must be disbanded following criminal prosecutions of all deep state abusers of power.”

The Globe reported that a handful of counter-protesters spoke to and filmed the protesters.

Chelsea Police Chief Brian Kyes told the Globe they were aware of the protest and were working with FBI officials to make sure peace was maintained during the demonstration.

“It was a peaceful demonstration with folks gathered to exercise their First Amendment right,” Kyes told the Globe.

Kristen Setera, a spokeswoman for the local FBI office, told the Globe the agency “respects the rights of individuals to peacefully exercise” their right to protest.

Since the FBI’s successful raid of Trump’s Mar-a-Lago home for classified government documents, protests and threats of violence against the FBI have skyrocketed.

On Aug. 11, a gunman attacked a Cincinnati FBI office and was shot and killed by authorities.

In another example, Carl Paladino, a Republican congressional candidate from New York, called for the death of Attorney General Merrick Garland for approving the FBI raid during an interview with Breitbart News. He said later that he was “just being facetious.”

The FBI and the Department of Homeland Security have issued a bulletin warning about the threats against the FBI and other government officials as a result of the search, according to CBS News.

Aside from the Straight Pride Parade, Super Happy Fun America and Refounding Fathers Coalition are known for their “Rise Against Tyranny Rally” on Nov. 7, 2021, which they held to protest COVID-19 vaccine and mask mandates.

The protest became violent after protesters and counter-protesters clashed. Police arrested two people, and though no injuries were reported, Globe photos show both groups spraying chemical irritants, as well as incidents of pushing, hitting, and hair-pulling.