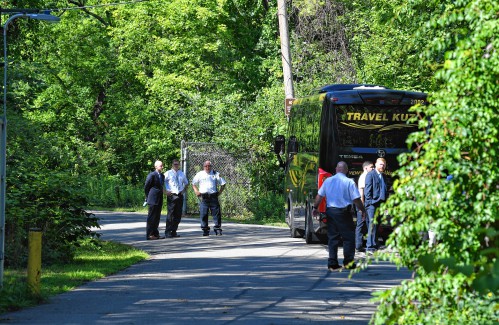 GREENFIELD — The trial of Keith D. Hamel, an Athol man accused of killing a 26-year-old Leominster woman in November 2019, began Thursday with the jury being driven around Athol to visit six locations they will hear about during testimony.

Sixteen jurors were sworn in and transported on a coach bus to the Athol Wastewater Treatment Plant, where victim Kelsey Clifford was found beaten to death, as well as to Main Street and four other spots in town. They were joined by Judge John Agostini, the attorneys in the case, the first assistant clerk magistrate, a court stenographer and various court officers. They were escorted by State Police, assisted by the Athol Police Department.

The parties returned to Franklin County Superior Court at around 12:45 p.m., where Agostini stressed to the jurors the “awesome responsibility” they have and explained the trial process before the court recessed for lunch. The jurors had also been taken to Union Street, Leonard Street, Silver Lake, and Athol Spirits at 9 Tunnel St.

Hamel, 25, has pleaded not guilty to single counts of murder and armed robbery as well as two counts of intimidation of a witness/juror/police/court official and four counts of withholding evidence from an official proceeding. He is accused of killing Clifford on Nov. 11, 2019. Clifford’s body was found that same day with at least 15 puncture wounds to her head and face.

Hamel is also alleged to have stolen $400 in cash and a cellphone from the victim after she was dead. The state alleges Hamel, who had a girlfriend, killed Clifford, who had a boyfriend, to get access to her cellphone to delete evidence of a sexual encounter between the two. He is being held without the right to bail. He was not in the motorcade to Athol, but rather was held in a cell in the courthouse in Greenfield.

Assistant Northwestern District Attorneys Jeremy Bucci and Joseph Webber are prosecuting the case for the state. Hamel is represented by attorney Joshua Hochberg.

Court resumed shortly before 2:30 p.m., with Bucci and Hochberg delivering opening statements to the jury. Bucci said Clifford was a mother, daughter and sister beaten to death with a hammer at around 3:30 a.m. on Nov. 11, 2019. Bucci said Hamel “was on a crack binge and he needed money.” Bucci told the jurors Hamel killed Clifford — his best friend’s girlfriend — to cover up a sexual encounter and stole her money to buy crack later that night. He said the defendant deleted Facebook messages “and (Clifford’s) cellphone was never seen again, and later that day, his cellphone disappeared.” He told the jurors they will hear a great deal about Hamel’s DNA being found on a sweatshirt, on Clifford’s body and on a cigarette in the victim’s hand when she was found dead.

Bucci explained a fellow inmate whom Hamel had befriended reported to Franklin County Jail and House of Correction officers that Hamel told him to inform them the murder weapon was in a sewer grate — where it was later found by authorities — but instructed him to tell officers the information came from Clifford’s boyfriend.

In his opening statements, Hochberg said Clifford’s boyfriend should be in the defendant’s chair, “not Keith Hamel.” He told jurors to expect to hear a lot of information about blood and DNA evidence. He also said Clifford’s boyfriend was upset Clifford would not stop working as an exotic dancer and he had no patience for previous girlfriends cheating on him. Hochberg referred to the state’s story about Hamel’s fellow inmate as “a sideshow” and told jurors they’re “going to hear a lot about drugs and alcohol abuse.”

Clifford’s mother, Allison Clifford, was the first to take the witness stand. She explained her youngest daughter had been living in Fitchburg and moved to Athol to elude money problems. Bucci displayed on the courtroom’s screens some Facebook photos the elder Clifford explained depicted Kelsey Clifford and her cellphone. She also identified her daughter in video footage from a Walmart and from Athol Spirits.

The state also called to the stand Andy Belloli, Mark Chapalonis and David Craven. Belloli is an Athol Wastewater Department employee who drove to the Police Department on Nov. 11 to report what he thought was someone sleeping in the tall grass outside the plant when he stopped by at 5 a.m. Chapalonis was a brand-new Athol Police officer who was the first dispatched to the scene, and Craven is an Athol Water Department employee who called police after also spotting Clifford’s body near an empty car with its doors open that morning.

Court was recessed at 3:15 p.m. Agostini asked jurors to report back Friday morning so the trial can resume at 9 a.m.