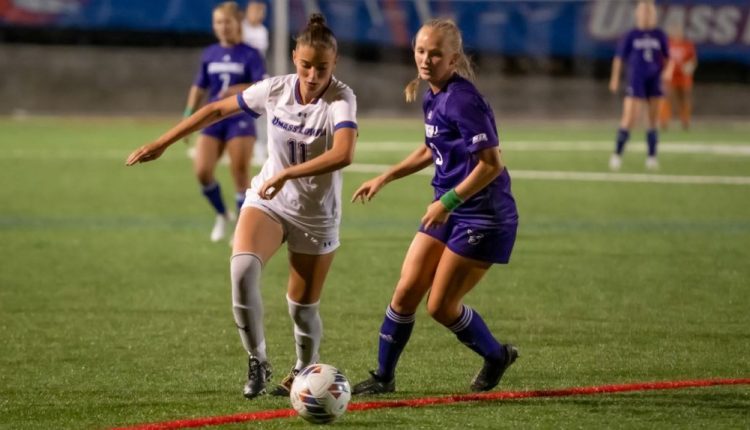 Coming off a winless season, the Alvirne High football team hung tight in its 2022 season opener at Spaulding, but the hosts scored two fourth-quarter touchdowns to pull away with a 36-13 victory on Friday in Rochester, N.H.

The clash with Spaulding was a conference crossover game, as Spaulding belongs to Div. 1 Central, while the Red Raiders represented Div. 1 East.

The Broncos return to action Friday by hosting Merrimack.

Portsmouth 5, Pelham 0 >> The Pythons’ cross-state voyage to the Seacoast region was not a pleasant one. Portsmouth received 2 goals from Charlotte Marsten and Pelham had no answer for the powerful Clippers.

Shawsheen 170, Minuteman 121 >> Medalist honors were earned by Matthew Tramonte, who led the Rams to the convincing victory at Pine Meadows Golf Club.

The River Hawks got out to a fast start with plenty of possession and time in the attacking third. In the 14th minute, UMass Lowell opened the scoring after redshirt senior Chaima Khammar (Cologne, Germany) started the attack in the defensive end. Khammar played Papatheodorou down the sideline before the sophomore cut inside and slipped a pass to Brookshire who finished the play for the 1-0 lead.

“I am thrilled to announce our incoming class of two transfers and three first-year players,” he said. “All five young men bring different things to the table and will certainly enhance our program with their character, their work ethic, and their love for the game. They are excited to be here and are ready to contribute to the upcoming season. I think our supporters will enjoy watching them play.”

One of the newcomers is Darrel Yepdo, a freshman from Dracut. The 6-foot guard is expected to be an impact player at Saint Michael’s.

“DY had a tremendous career at Brooks School in Massachusetts and comes to us with a reputation as a leader and a great teammate,” Eaton said. “He’s a very quick and explosive athlete, and can make an impact on both ends of the floor with both his talent and how he thinks the game. Darrel has an infectious energy and is a team guy. He works hard in the weight room, as well, and is ready for the season.”

Morneau was the first runner to finish in 16 minutes, 22.4 seconds.

UMass 3, UMass Lowell 2 (OT) >> A pair of third-quarter goals helped UMass Lowell  (1-2) take No. 25 UMass to overtime, but the home team would prevail in the shootout in this year’s Kennedy Cup matchup in Amherst.

The teams battled through 20 extra minutes of 7v7 overtime play with neither side able to break the 2-2 deadlock, forcing the game to go to a shootout. Graduate student Jenna Berger (Waterloo, Ontario) pulled the opposing goalkeeper out of position and slid a ball into the corner of the cage to knot the shootout at 1-1, but Dempsey Campbell was successful on the Minutewomen’s final chance to end it.

“We put everything out there today,” said UML head coach Shannon LeBlanc. “We played a tremendous full 60 and two overtime periods. The talent and composure that we displayed today was outstanding. This game certainly goes down as one of the grittiest Kennedy Cup games to date.”