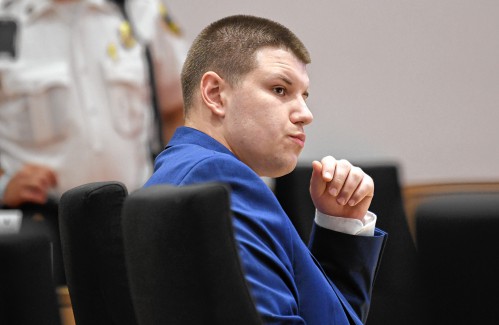 GREENFIELD – The jury is still out in the case of Keith D. Hamel, an Athol man accused of killing a woman in November 2019, and will continue deliberations Wednesday after spending about 7½ hours behind closed doors Tuesday.

The prosecution and defense rested their cases in Franklin County Superior Court last week and the 12 deliberating jurors started working toward a verdict on Friday, adjourning for the three-day weekend after two hours and 40 minutes. Courts were closed on Labor Day on Monday.

As he had before court adjourned Friday, Judge John Agostini mentioned he had received a note from the jury requesting a whiteboard, Post-it notes and some new markers on Tuesday. He said these items would be available in the jury room. Court reconvened at 9 a.m. and jurors exited the courtroom at 9:09 a.m. to continue deliberations.

Hamel, 25, is accused of using a hammer to murder 26-year-old Kelsey Clifford on Nov. 11, 2019, to conceal a sexual encounter between the two and to steal money from her. Clifford’s body was found outside the locked gates of the Athol Wastewater Treatment Plant with at least 15 puncture wounds to her head and face the day she was killed.

Hamel has pleaded not guilty to single counts of murder and armed robbery as well as two counts of intimidation of a witness/juror/police/court official and four counts of withholding evidence from an official proceeding. He is also alleged to have stolen $400 in cash and a cellphone from the victim after she was dead.

Assistant Northwestern District Attorneys Jeremy Bucci and Joseph Webber are prosecuting the case for the state. Bucci appeared in court via Zoom on Tuesday, having recently tested positive for COVID-19. Hamel is represented by attorney Joshua Hochberg.

Court is set to resume at 9 a.m. on Wednesday.

On The Market: 3 Jaw-Dropping Boston Properties