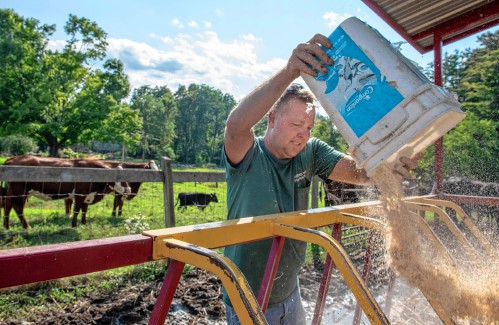 The Recorder – Scrambling to adapt in the face of change

FLORENCE — Scientists can give us a 30,000-foot view of how climate change is now impacting our planet. Bob Vollinger can tell you how that translates to daily life at Vollinger Farm in Florence. Some of the repercussions are unexpected.

“I’ve never seen it so dry,” he said, before the recent rain earlier this month. “Right now, I’m having a hard time even keeping my cows inside the electric fence. There’s not enough moisture in the soil for the grounding rod to work properly, so they push right through.”

Vollinger Farm is built around grass and cows. Vollinger cuts and sells hay, mostly to other local animal farms, and raises his own beef cattle. He also grows winter squash and fall flowers for sale at a farm stand at 460 North Farms Road in Northampton.

Any farm, unless it’s indoors, is beholden to seasonal weather patterns, which are in turn controlled by long-term climate trends. This is especially true for places like Vollinger Farm, where everything relies on grass growing well, and little can be corrected when the weather doesn’t cooperate. The cost of irrigating or draining that much pasture is a nonstarter.

So, with too much rain last year and too little now, Vollinger’s hay harvest has struggled. In New England, most farmers get two or three harvests, or “cuttings,’ out of a healthy field. This year Vollinger’s first cutting went well, then production plummeted.

“Normally for second cut, you should get at least 50 bales per acre,” he says. “This year on one of my fields we got 11 bales an acre. One farmer I know is washing his equipment and putting it away for the winter now, because there’s nothing worth cutting in his fields.”

Rising costs of fuel and labor are also eating into his earnings, and so are his cows — literally. Grazing pastures are so parched he’s already feeding them hay intended for sale.

“Meanwhile, I’m noticing the calves aren’t growing as quickly as they should,” he says. “I think it’s because the quality of grass isn’t there, along with there not being enough.”

For Vollinger, this year’s drought is one chapter in a larger story of change.

“We’ve always had variability,” he says, “but over the last eight to 10 years it’s been getting more extreme between drought or too much water. You never know what to expect. That’s what we’re experiencing with climate change.”

Vollinger Farm is just one of thousands pasture-based farms across the country affected by how climate change is cranking up the dial on weather variability. When these farms can’t rely on consistent conditions, their income and viability are threatened, as is the fate of the land they steward.

In New England, pastureland used for grazing or haying covers about 450,000 acres, according to Food Solutions New England. That’s eight times the footprint of the city of Boston, or 26,000 Gillette Stadiums, if you prefer.

Says Vollinger, “If farms weren’t here, we would grow less food, development would move in, and we wouldn’t have this quiet space and natural habitat to enjoy. I don’t know if people get that.”

When stewarded well by thriving farms, this land feeds millions of New Englanders. It accounts for much of the region’s open space, which benefits everyone through increased habitat diversity, water quality, and other ecosystem services. For many, pastureland is also central to the region’s aesthetic and rural character — the reason living here feels the way it does.

How are farms adapting to the added pressures of climate change to keep their pastureland open and productive? In his case, Vollinger is diversifying his business while investing in the health of his land to build resilience.

“All this variability is partly why I started into beef eight years ago,” he says. “The market for hay wasn’t good, I had the pastureland already, and I thought maybe that was a way to branch out.”

Initially he raised cows to sell to other farms. Now he’s starting to sell his own beef directly to customers, with hopes of expanding his farm stand to carry that and products from other nearby farms.

Before the beef cattle arrived, some pastures had been grazed years ago when the farm kept a dairy herd, but many were choked with invasive species that cows don’t eat, like oriental bittersweet and multiflora rose.

“I reached out to NRCS (the Natural Resource Conservation Service) and got funding and guidance through EQIP (their Environmental Quality Incentives Program) to clear that and open up a lot more grazing space,” he explains.

After reclaiming those pastures, Vollinger has decided to graze his cows rotationally through smaller areas rather than letting them browse freely. Depending on how it’s managed, this type of grazing can promote better soil health, healthier and more diverse forage, and could even help sequester more carbon in the soil.

“Eventually we’ll have 12 to 15 paddocks, and we’ll move the cows every two weeks,” he says. “I’ve noticed a real difference since we started doing it. The cows eat the pastures down more evenly and the grass grows back better.”

Vollinger also has tapped back into an old water source — not enough to water a hayfield, but enough for his cows to drink.

“There used to be an old uphill spring house that brought water down to the cows and house, but over time most of the pipes broke and we abandoned it,” he says. “Then during another drought a few years ago, I re-dug a catch basin up at the spring and ran some new pipe.”

Together with NRCS, he’s designed a system that will collect and distribute water to each grazing paddock, but nothing is built yet.

Farmland preservation programs are another tool many farmers use to keep their business afloat and land in farming. Often administered by state or federal government, these programs compensate farmers financially for restricting development and committing their land to agricultural use, either momentarily or in perpetuity. Each has their pros and cons.

Currently, Vollinger has enrolled 80 of his 240 acres in the Massachusetts Department of Agriculture’s Farm Viability Enhancement Program. “I agreed to a development lock-out for five years, and in return got money I could use to buy a new hay bale wrapper and mower,” he explains.

He’s also working with Kestrel Land Trust, the city of Northampton, and NRCS’s Agricultural Conservation Easement Program to permanently preserve another 150 acres for agricultural use.

“Farmers get a bigger chunk of money for that,” Vollinger says, “but once you enroll your land, that’s it.” There’s no going back, and no more preservation revenue available.

The driving force behind all of these changes is Vollinger’s hard work and ingenuity. He’s farmed his whole life, and for several years also worked full time at Smith Vocational and Agricultural High School.

Alongside family and community support, government programs that advise and compensate farmers for stewarding resources have also been crucial.

The NRCS Environmental Quality Incentives Program, designed to guide and pay farmers to maximize the public environmental benefits their farms provide, has funded many of Vollinger’s projects from the initial design through installation, including the cost of labor. He does have to invest his own money up front, but NRCS reimburses.

Funding for NRCS conservation programs is usually controlled by the Farm Bill, federal legislation that’s updated every five years. However, the recent Inflation Reduction Act also funded a $20 billion investment in these programs between 2023 and 2026, amounting to a significant yearly increase.

While that investment is good for local farmers, it’s worth noting that most NRCS funding is directed toward states where agriculture has more economic and political sway. For example, between 1998 and 2015, Massachusetts farmers earned $36 million in EQIP support, while farmers in Iowa received $235 million. California farmers got $602 million.

Meanwhile, Massachusetts farmers contend with rising labor costs and the fifth highest cost of farm real estate per acre in the country, according to the U.S. Department of Agriculture. Extreme weather and inflation only erode their slim profit margins further.

“I can’t emphasize this enough,” Vollinger says. “If it wasn’t for some of the funding programs we have, I’d never have been able to clear out all these invasive species, put fences back up, and start raising grass-fed beef along with the hay, squash and flowers we’re doing here today. We’d never be able to afford invest in our land for the future like this.”

Jacob Nelson is communications coordinator for CISA (Community Involved in Sustaining Agriculture). As a frontline supporter of local food and farms in western Massachusetts, CISA helps farmers get the help and funding they need to thrive.

Want to learn more about how the Inflation Reduction Act will support farmers in adapting to climate change? CISA will explain in a free online workshop on Sept. 19 from 4 to 5 p.m., as part of their inaugural Climate Change and Farming Week. Learn more at bit.ly/CISAclimateweek.

Climate Change at Home is sponsored by Whalen Insurance in Northampton.