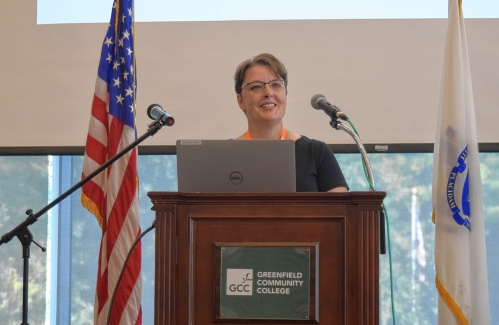 GREENFIELD — Greenfield Community College celebrated 60 years in education over the weekend, with events throughout Saturday marking the milestone.

“I like being here a lot,” commented student Catharine Livingstone. “I hope they continue making sure each student has equal opportunities for education.”

In this milestone year, GCC recently hired a new president in Michelle Schutt, who, in a speech on Saturday, explained that when community colleges were first created, their focus was on getting more people into college. Gradually, the institutions started pushing harder to get people to complete college programs.

“We have been partnering with local employers to find out what skills they are looking for,” she said in an interview.

Schutt, who took over as president on July 18, explained the key aspects in the vision for GCC are learning, completion, transfer and workforce. Each of these goals are overlaid by equity, ensuring everyone can succeed at the institution.

For example, when Joshua Carnes found GCC, he had not graduated from high school.

“I didn’t think I’d go to college,” he recalled.

Carnes explained the open enrollment helped him get started on his journey. After graduating from GCC in 2015, he went on to get an engineering degree from the University of Massachusetts Amherst. He now works as an engineer.

In particular, Carnes said he loved the math background he received in Greenfield, citing his “amazing professors,” and how he didn’t need to take any additional math classes once he arrived at UMass.

Regarding suggestions for the future of the community college, Carnes said, “I love the wide variety of career options. … If there is a way to expand it, go for it.”

Alumna Astrid Sheckels explained many students at GCC go on to get higher degrees at other institutions, but when she graduated in 2004, she did not enroll at another school. Instead, she became a children’s book illustrator.

“I use everything I learned here in my work,” she said.

Sheckels explained she learned how to push herself while attending GCC. Her professors taught her to not stop at her first attempt and to explore different ideas.

“I came back today as a thank you,” she commented on Saturday.

Michelle Phillips works as Baystate Health’s director of ambulatory nursing, but didn’t know she would make it this far when she graduated from GCC in 2009.

Phillips explained her one-on-one attention from professors at GCC was unmatched for the rest of her time in higher education. She took that lesson she learned at GCC, and tries to apply it to her own work, getting to know the 400 nurses she manages. She noted she always advocates to get Baystate’s services in Greenfield, having seven other locations of the Springfield-based company competing for resources.

While the alums feel their time at GCC was special, current students feel similarly.

“It means a lot to be here,” said student Madeline Weinstein. “The professors really care about me.”