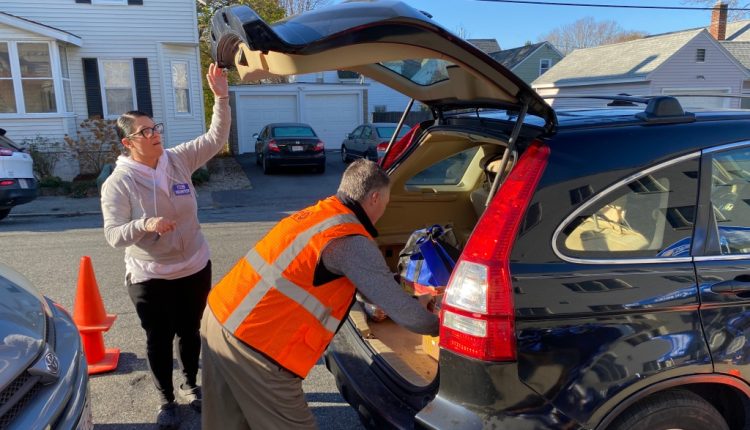 LOWELL — People came from Lowell and they came from Lawrence. They patiently sat for hours in idling cars in lines that snaked for blocks through the Pawtucketville neighborhood, home to Dwelling House of Hope, waiting their turn to pull up and receive a to-go Thanksgiving dinner box.

She said the bounty being handed out reflected the mission’s focus to alleviate poverty among people in need with love and respect.

“We believe that the Lord is dwelling this place,” Furlisa said, gesturing to the building behind her that holds DHH’s large food pantry.

“He has built this ministry,” Furlisa continued. “We started it in the basement of my house in 2010 feeding people, and moved to this space in 2016.”

The pantry is adjacent to Fusion Lowell, a nondenominational church, which partners with DHH. The church hosted a well-attended COVID-19 clinic at the same time as the food drive. DHH outreach volunteer Lungile Gardner, and Greater Lowell Health Alliance outreach worker Lauren Seidel, both of Lowell, handed out hygiene kits to each vaccinated person.

Howard was working the pantry assembly line. She’s been a volunteer for the event since 2017.

“The need is great now that prices and everything has gone up,” Howard said, as she loaded bags of carrots into rectangular cardboard boxes set up on a wheeled cart.

The work of loading almost 60,000 pounds of food into cars was handled by Drinkwater, Elliott and Gitschier. They were assisted by 10 house brothers from UMass Lowell’s Delta Kappa Phi fraternity, whose president Samuel Cullinan, of Burlington, said they arrived at 7 a.m. to get ready for the 8 a.m. start.

“My frat house heard about this online, and saw that they needed volunteers so we decided to help out,” he said. “We’ve been loading up a lot of cars.”

Kennedy, who is nursing a broken collarbone, was directing traffic, and said “Levenia does an amazing job” meeting the needs of the community.

“I’ve been coming here several years, and it always attracts a lot of people, but this is off the charts.” he said. “This is the most need I’ve ever seen far and away.”

Driving in from Lawrence to receive a dinner box were Jaraliz Mejia and Alexander Mota. In her lap, Mejia cradled her 2-month-old daughter, Novaliz.

“We’re in transition between homes,” Mejia said. “This really helps with our food situation. We’re getting a box with the turkey.”

In between unloading a pallet of 5-pound bags of potatoes, Furlisa reflected on the work of feeding people. In addition to United Way’s support that day, she credited the Cummings Foundation for their generous support of DHH’s programs, including its youth group, members of which were working the assembly line filling boxes with potatoes, rice, corn, beans, onions, bread, stuffing, a roasting pan and a $15 gift card.

Frozen turkeys sat in carts at the curb waiting to be loaded in with the dinner boxes. In spite of the organized chaos, Furlisa was pleased with how the event was going.

“The people are very nice and calm,” she said. “We’re all working together as a community.”