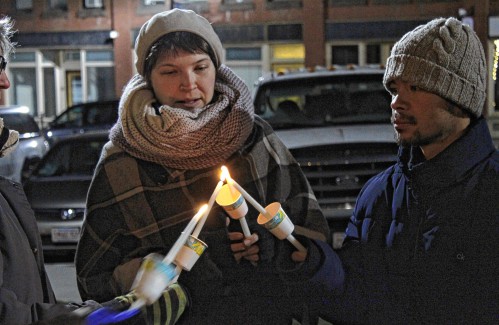 GREENFIELD — Standing with lit candles at the Fiske Avenue pocket park, residents stood in solidarity with the LGBTQ community in the wake of the Club Q shooting in Colorado Springs, Colorado.

The message shared Tuesday evening was clear for the five people killed and the LGTBQ community as a whole: “We stand with you,” which those in attendance repeated after the name of each victim was read. They are: Raymond Green Vance, Kelly Loving, Daniel Aston, Derrick Rump and Ashley Paugh.

“This is the time we stand together,” said Franklin County Pride committee member Cynthia Fritz. “Strength in numbers.”

The gathering of nine people was born earlier Tuesday as Franklin County Pride tried to find a way to respond to Saturday night’s shooting, which occurred after a man wearing body armor and wielding an AR-15 style rifle and a pistol entered Club Q, an LGBTQ club in Colorado Springs, and began shooting. Club patrons were able to subdue the gunman, who killed five people before being arrested by police.

“We wanted to do something as a response to what happened this weekend,” explained Franklin County Pride committee member Heather Mahoney.

When they awoke to the news Sunday morning, Mahoney, Fritz and several others in attendance said they experienced a surge of emotions: anger, fear and shock. Still, they also felt a sense of being unsurprised that a safe haven for LGBTQ people was targeted by a gunman following increased anti-trans rhetoric around the country.

“They are absolutely fanning the flames,” said Franklin County Pride committee member Kacie Dean. “These people are emboldened. There are no lines, no values and no principles.”

Those feelings, Greenfield resident LJ Boswell said, were an “echo” of the 2016 Pulse nightclub shooting in Orlando, Florida, where 49 people were killed at a gay nightclub by a gunman in retaliation for American airstrikes in Iraq and Syria.

“It’s an echo of Pulse and an echo of all the other shootings,” Boswell said, adding that grieving as a community through vigils can help people process the “cumulative grief” of the world that continues to build.

During the vigil, Boswell shared the same feelings as Dean, saying this “violation” of a queer “safe haven” is a growing pattern across the country. Boswell referred to the continuing bomb threats directed toward Boston Children’s Hospital because it provides gender-affirming care to transgender and non-binary youth, which has prompted a group of 36 congresspeople, including U.S. Rep. Jim McGovern, to write to the Department of Justice to take action.

“This is a pattern, this is not isolated,” Boswell said. “Name the pattern.”

Singing Ben E. King’s “Stand by Me,” Fritz and others at the vigil again emphasized the strength and power that comes with community.