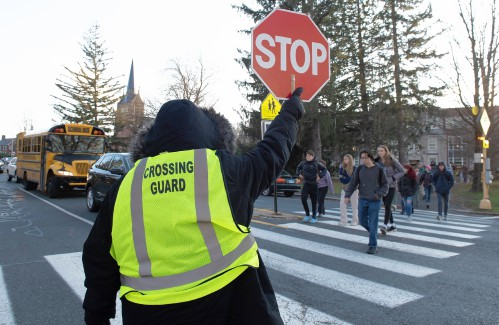 Crosswalk danger: Another pedestrian hit by car in front of NHS as city awaits study on safety improvements

NORTHAMPTON — John Engel was helping his daughter load her bike into his vehicle in front of Northampton High School on Monday, Nov. 14, when he suddenly heard the sound of a car slamming on the brakes, followed by the noise of two cars colliding with each other, followed by a cry of distress.

A 15-year-old boy, Pranav Belur, had been struck while in the crosswalk after cross-country practice at around 5 p.m., and was lying on the ground in pain. Engel, along with another person, rushed to help until police arrived and the boy was treated for his injuries.

Pallavi Bandalli, Belur’s mother, had texted her son only minutes earlier asking if he wanted to just walk to their nearby home on Jackson Street or if he wanted her to pick him up. When he didn’t respond, she began to grow worried. Then she received a call saying her son had been hit by a car.

“I was really scared,” she recalled. “My daughter was with me, and we both immediately went to that area and I was surprised to see so many police cars, and I knew something was not right.”

Belur was taken to Baystate Medical Center in Springfield to be treated. He ended up suffering a mild concussion and a broken femur, according to Bandalli.

The Nov. 14 accident recalled the death of Charlie Braun, a musician who lived in the vicinity and was killed at the same crosswalk while riding his bicycle in October 2021. The driver in that crash was engaged in a 53-second FaceTime conversation with a friend on her cellphone and was further distracted by her young child in the back seat, authorities said.

Earlier this year, a crossing guard was also injured at the same crosswalk.

“The boy didn’t die, which is the good news,” Engel said. “But there’s a very thin line here between the boy is injured and recovering and the boy could have died and this could have ended in death, as it did with my former neighbor Charlie Braun.”

Engel, who lives near the center of Florence, not far from the high school, was already aware of some of the safety risks posed by the area. In fact, that is why he was at the school that Monday, to pick up his daughter, who had biked to class that morning. He didn’t want her biking home in late afternoon, knowing it would be dark.

“She would have been walking her bike through that very crosswalk two or three minutes before that accident happened,” Engel said. “There are seven kids on our block that attend NHS, so it feels like an immediate issue of concern.”

Since Braun’s death last year, city and school officials have tried to address concerns regarding the safety of the area. Engel said he had been in contact with local officials, including state Sen. Jo Comerford, to resolve the issue.

“I was heartsick to hear about the student who was struck in front of Northampton High School,” Comerford said in a statement. “I am in communication with local officials, Senate leadership, and with MassDOT about these incidents and what we can and must do to make our roads safer for students, cyclists, and all members of our community.”

The mayor’s office, along with the Department of Public Works and the Northampton Police Department, have been in talks regarding how to improve the area’s safety. Mayor Gina-Louise Sciarra said the city has commissioned an engineering study with an outside consultant, and are awaiting results before taking action.

“It is taking longer than we’d hoped and longer than we expected,” Sciarra acknowledged. “Like everyone, I think they’re short-staffed so we’ve been pushing. But then once we get the study, anything like this takes a while.”

For Engel, the efforts by city and school officials have not been enough.

“I don’t expect people to have a single solution that gets enacted Monday morning,” he said. “But I expect someone to take leadership, to communicate publicly what’s happening, what steps are being taken, and I’m just not seeing that.”

Additional lighting for the area has been proposed by the mayor as a possible way to improve safety. Bandalli agreed with the idea, saying that she believed lack of proper lighting played a role in the accident that injured her son.

Police said the accident occurred when the driver, an 18-year-old from Easthampton, was checking his rearview mirror, believing the driver behind him was tailgating.

When the driver struck the boy, the car behind him subsequently rear-ended the driver’s vehicle.