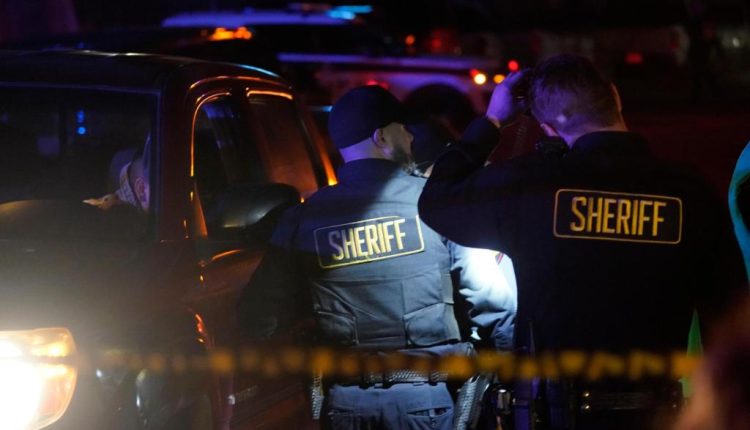 HALF MOON BAY, Calif. (AP) — An agricultural worker killed seven people in back-to-back shootings at two mushroom farms that had employed him in Northern California and the massacre is believed to be a “workplace violence incident,” officials said Tuesday as the state mourned its third mass killing in eight days.

Officers arrested 66-year-old Chunli Zhao on Monday after they found him in his car in the parking lot of a sheriff’s substation, San Mateo County Sheriff Christina Corpus said.

Authorities believe Zhao acted alone when he entered a mushroom farm in Half Moon Bay, California, where he worked, and opened fire, killing four people and leaving another seriously wounded. He then drove to another nearby farm where he had previously worked, and killed another three people, said Eamonn Allen, a spokesman with the San Mateo County Sheriff’s Office.

No further details about Zhao’s motivation or the names of the people he killed were released Tuesday afternoon.

At an earlier news conference, Allen declined to answer questions about whether Zhao had any previous criminal history, saying, “there were no specific indicators that would have led us to believe he was capable of something like this.”

“All of the evidence we have right now points to a workplace violence incident,” Allen said. The dead were five men and two women. The eighth gunshot victim, a man, remained in the hospital. Some were Asian and others were Hispanic, and some were migrant workers.

It would not have been Zhao’s first fit of workplace rage, the San Francisco Chronicle reported Tuesday. In 2013 Zhao was accused of threatening to split a coworker’s head open with a knife and separately tried to suffocate the man with a pillow, the Chronicle reported, based on court documents.

The two were roommates and worked at a restaurant at the time, and the man, identified as Jingjiu Wang, filed a temporary restraining order against Zhao, which was granted and is no longer in effect. Wang could not be immediately reached.

The sheriff’s office identified the first shooting location as Mountain Mushroom Farm. But California Terra Garden took over the business last year, the company spokesperson David Oates said. He did not know how long Zhao had worked there, adding that he was one of 35 employees who had stayed on when ownership changed. Oates declined to provide details of the four slain workers.

After the first incident, Zhao allegedly killed three others at nearby Concord Farms. Owner Aaron Tung said in a statement that the facility was waiting for more information before it could comment. He said the farm was a family-owned operation for 37 years, and he thanked the community for its support.

Half Moon Bay is a small laid-back coastal city with agricultural roots about 30 miles (50 kilometers) south of San Francisco. Its sweeping views of the Pacific Ocean make it a popular spot for hikers and tourists, who flock to the beaches for surfing and to an annual giant pumpkin festival.

Earlier this month the area was hit by heavy rainstorms that caused flooding and damage, temporarily preventing farmworkers from earning, Half Moon Bay Vice Mayor Joaquin Jimenez said. Several farmworkers and their families lived in mobile homes at the the mushroom farm where four died and had been relocated to hotels and offered mental health and other support after the shootings. He said the farm employs 20 to 30 Chinese and Latino workers, some of them in the country without legal permission.

“There’s a lot of fear. We have to understand, a lot of our farmworker community is also undocumented, so there’s also the fear of that, of their legal status. So for them to come forward to ask for help is going to be very difficult,” said Jimenez, who is also the farmworker program director for ALAS, a Latino community advocacy group in the city.

“We don’t need this kind of stuff in agriculture,” he said of the shooting.

Aerial television images Monday showed police officers collecting evidence from a farm with dozens of greenhouses, which appeared to be the location where police found four dead. On Tuesday morning, police continued to block off the location. There was little visible activity at the second farm.

California was still reeling from an attack in Monterey Park, just outside Los Angeles, that killed 11 and cast a shadow over celebrations of Lunar New Year, an important holiday for many Asian American communities. Authorities are still seeking a motive for the Saturday shooting.

“For the second time in recent days, California communities are mourning the loss of loved ones in a senseless act of gun violence,” President Joe Biden said Tuesday. “Even as we await further details on these shootings, we know the scourge of gun violence across America requires stronger action.”

The new year has brought six mass killings in the U.S. in fewer than three weeks, accounting for 39 deaths. Three have occurred in California since Jan. 16, according to a database compiled by The Associated Press, USA Today and Northeastern University. The database tracks every mass killing — defined as four dead not including the offender — in the U.S. since 2006.

About two hours after first receiving reports of a shooting, a sheriff’s deputy spotted Zhao’s car parked outside a sheriff’s substation in a strip mall and arrested him.

“He did not actively surrender to us,” Allen said, declining to answer a question on why Zhao had driven there.

Video showed three officers approaching a parked car with drawn weapons. Zhao got out of the car, and the officers pulled him to the ground, put him in handcuffs and led him away. A weapon was found in the vehicle, officials said. The video was captured by Kati McHugh, a Half Moon Bay resident who witnessed the arrest.

“We’re still trying to understand exactly what happened and why, but it’s just incredibly, incredibly tragic,” said state Sen. Josh Becker, who represents the area and called it “a very close-knit” agricultural community.

It’s a majority-white community. About a third of the population is Latino and about 5% is Asian, according to Census data.

At a Tuesday afternoon news conference, Gov. Gavin Newsom said he met with Chinese farmworkers who heard the gunshots. Speaking through a translator, they said it was hard to comprehend what was happening.

“They had never heard a sound like that,” he said.

The shooting was likely to leave some in the community fearful and searching for other work, he said.

“The trauma and the damage, the devastation is felt for generations in some cases, communities being torn asunder no one feeling safe,” Newsom said.

The shootings in Half Moon Bay and Monterey Park followed the killing of a teenage mother, her baby and six others at a home in California’s Central Valley on Jan. 16. Officials discussing the investigation mentioned a possible gang link to the killings.