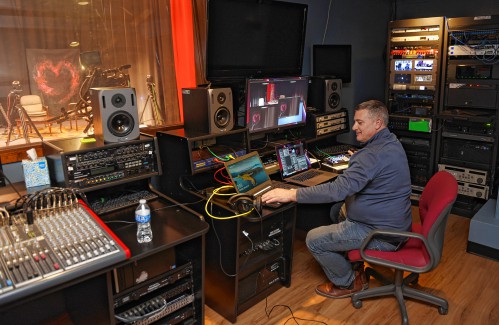 If ever there was a time that proved the need for community access television, it was the COVID-19 pandemic.

“Every access center in Massachusetts stepped up and showed they were able to bring information to the community,” said Athol-Orange Community Television (AOTV) Executive Director Carol Courville.

Now, after years of watching the changing landscape of digital media — in particular, the growth in streaming services — legislators are looking to modernize funding for community media programming in a way local public television advocates say will “level the playing field.”

“The media world has changed so much in the past 20 years,” said Greenfield Community Television (GCTV) board of directors President Garry Longe.

Longe explained that historically, the Federal Communications Commission has dictated that towns can receive up to 5% of the revenue from a cable provider’s contract so that the profit may be used to provide and support local public, education and government (or PEG) access channels. Locally, those public access stations include GCTV, AOTV, Bernardston-Northfield Community Television (BNCTV), Montague Community Television (MCTV), Frontier Community Access Television (FCAT) and Falls Cable.

HD.215, filed earlier this month by Rep. Joan Meschino, D-Hull, and Rep. Matthew Muratore, R-Plymouth, aims to expand that 5% revenue paid to the state to include streaming entertainment operators. A similar bill was filed during the last legislative session but failed to make it out of the Senate after passing the House of Representatives.

“The bill, as I understand it, is going to level the playing field,” said Longe, who has served on GCTV’s board since 2005.

The transition to streaming services has many “cutting the cord” for cable television, relying solely on internet instead, according to Longe.

Courville said it was important to recognize adding a streaming operator fund is not imposing a new fee; rather, it’s saying, “these people are already paying us, it’s only fair the other people start sharing in that.”

Otis Wheeler, who serves as operations manager at BNCTV and station manager at Falls Cable — in addition to being on the GCTV board of directors — said without the success of this bill, or another one like it, community access television will fall by the wayside within a couple of decades. This could shift the burden of covering local government and school committee meetings to the taxpayers.

“For years, people have asked me about the future of community access, because cable is last century’s technology,” Wheeler said. “It’s a relief to hear about this bill. It would really stabilize revenues if it were to pass.”

Longe and others spoke to the challenge of offering cable television programming when “you never know what your income is going to be.”

“There are so many free television services out there now,” Longe said, naming Hulu, Tubi and Pluto as examples. “You don’t get local news and local input when you’re looking at the other services, and people want to know what’s going on in their local community. Providing people with a local voice is important.”