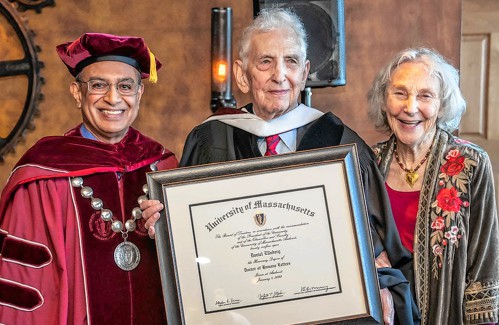 AMHERST — Daniel Ellsberg, the whistleblower who leaked classified information pertaining to the Vietnam War known as the “Pentagon Papers,” was awarded an honorary degree from the University of Massachusetts Amherst in a ceremony held in San Francisco last weekend.

Ellsberg was an employee at RAND Corp., a U.S. military think tank, and worked at the Pentagon under former Secretary of Defense Robert McNamara during the Vietnam War. After becoming disillusioned with the way the war was going, Ellsberg leaked the Pentagon Papers to the New York Times and the Washington Post, revealing the U.S. government had lied about some of its actions in Vietnam. Ellsberg was tried for espionage as a result of his actions, but the charges were dismissed in court.

The awarding of the honorary degree to Ellsberg comes following the decision by UMass Amherst to be the archive for all of Ellsberg’s documents, consisting of some 500 boxes’ worth. The university acquired the documents in 2019 for $2.2 million. Robert Pollin, a distinguished professor of economics at UMass, was one of the people involved in connecting Ellsberg to the university and spoke at the San Francisco ceremony.

“I will never forget being an undergraduate student, sitting at the University of Wisconsin student union building, watching Dan being interviewed by Walter Cronkite on the CBS Evening News about the release of the Pentagon Papers,” Pollin said in his remarks at the ceremony. “The impact on me, and on the hundreds of other students watching with me, was profound. Dan gave us affirmation and confidence that what we were doing was right.”

In an interview, Subbaswamy recalled immigrating to the United States in 1971, around the time the Pentagon Papers were making headlines across the country.

“I learned my part of modern American history in the haze of Vietnam,” he said. “What we’re drawing attention to is internally relevant issues about the preservation of democracy, the importance of truth-telling, and holding governments accountable.”

Despite being a graduate of Harvard University, a former employee at the Massachusetts Institute of Technology, and residing outside the University of California at Berkeley, this is the first time Ellsberg has received an honorary degree from any institution of higher learning.

“This is actually the first institutional community that I’ve been in for 50 years,” Ellsberg said at the ceremony, “since I left RAND in 1970 and MIT in 1972 when they terminated my fellowship at the Center for International Studies because I was on trial.”

Subbaswamy said the lack of recognition for Ellsberg might be indicative that the topic of government whistleblowers is still an uneasy one in the United States.

“It sort of goes to show that I think our country still hasn’t quite come to terms with government whistleblowers,” Subbaswamy said. The question of “what is truth and patriotism is something that I think as a society perhaps we are not quite comfortable with.”

In 2020-2021, inspired by the arrival of Ellsberg’s papers, the university sponsored a host of historic ventures to explore his life and legacy — a yearlong seminar, the creation of a website (the Ellsberg Archive Project), a series of podcasts by The GroundTruth Project, and an online conference with more than two dozen scholars, journalists, former policymakers, whistleblowers and activists. Videos of conference sessions hosted on the website have drawn more than 25,000 viewers.

The university has also announced the creation of the Ellsberg Initiative for Peace and Democracy that will “highlight the value of the Ellsberg archive” and “engage the public in the vital issues so central to Ellsberg’s legacy,” according to UMass.

“The initiative really is to try to build on the momentum established by the acquisition of the papers,” said Christian Appy, a professor of history at UMass and the director of the initiative. “It will advance public awareness, scholarship and activism on the overlapping issues that define Ellsberg’s life and legacy: peace, anti-militarism, First Amendment rights, truth-telling, public interest whistleblowing, nuclear disarmament, and social and environmental justice.”

Alexander MacDougall can be reached at amacdougall@gazettenet.com.