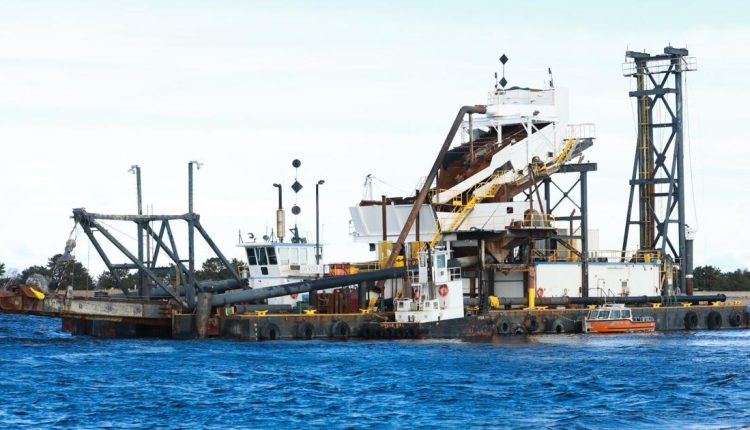 NEWBURYPORT — Plum Island residents will have an unsightly but temporary neighbor that is about to deliver some peace of mind, and a lot of sand, to the people on Reservation Terrace.

The U.S. Army Corps. of Engineers has been working with New York-based H&L Contracting to dredge a nine-foot deep channel of sand on the Newburyport side of the Merrimack River, as well as a 15-foot deep channel on the Salisbury side of the river that will then be deposited on the beach by Plum Island’s Reservation Terrace.

The $9 million federal dredging project will see at least 226,000 cubic yards of dredged sand placed along Reservation Terrace, which will also see about 400 feet of beach reestablished to protect the many homes that border the area, one of which was condemned in January, due to flooding.

Harbor Master Paul Hogg said the dredging of the the nine-foot channel has been completed and the roughly 220-foot-long, 70-foot-wide dredger Oyster Bay arrived over the holiday weekend and is currently in the process of preparing to finish dredging the 15-foot channel.

“They got the big boy out for this. The guys on board talk in these southern accents and they say she is a ‘big mother,’ which is pretty funny. But they are great to work with,” he said.

The Oyster Bay is also expected to begin placing sand on the beach at Reservation Terrace this week.

“They’re just trying to get that 15-foot channel all buttoned up and get everything prepared. Then that thing’s going to start throwing some major sand,” Hogg said.

Reservation Terrace resident and at-Large City Councilor Mark Wright said pipe is being mobilized to deliver over 190,000 cubic yards of sand to his neighborhood beach soon.

“They haven’t connected any of it to the dredge yet. But, as far as I can tell, that’s apparently what they’re concerned with now and are mobilizing the pipe to deliver the sand,” he said.

The sand will arrive on the beach as a sand/water slurry, according to Wright

“The water propels the sand, then the water runs off and the sand remains in place,” he said.

Wright added work went on around the clock when staff were dredging the nine-foot channel but any additional noise has been worth the inconvenience.

“Compared to not having the sand here, putting up with a little bit of inconvenience is great. We’re looking forward to seeing exactly how much sand is going to come on to the beach,” he said.

Wright did, however, say the dredge project remains a temporary fix for a manmade problem that originated when the Army Corps. of Engineers built the south jetty and created a tidal gyre in 2014.

But $240,000 has been secured in federal funding that will allow the Army Corps of Engineers to study how to alleviate the problem on the south jetty.

“This will only last for about two or three years, so they want to see if there is a permanent solution. We are advocating for an extension of the spur, so that there’s a hard structure that runs from the back of the south jetty, almost parallel with where they’re going to be placing the sand. That will keep the sand in place and it will also provide a hard structure barrier there that would prevent this from happening in the future,” Wright said.

State Sen. Bruce Tarr, R-Gloucester, said he hopes to see the dredging project completed by the end of the year but added it must be finished before piping plovers return to the area in April.

Placing new sand on the beach off Reservation Terrace is a welcome sight Tarr said but quickly added it was not the end of the story.

“A more sustainable solution needs to be our ultimate goal. But the sand buys us precious time to be able to get that end result,” he said.

Hogg advised boaters to reach out to him at 978-360-6963 if they are looking to traverse the mouth of the Merrimack River in the near future.

“There’s not many boats going out or transiting these days. But there are some commercial guys out there and they should reach out to me, just to see where (the dredge is) on that particular day,” he said.

Jim Sullivan may be contacted at jsullivan@gloucestertimes.com